SEOUL – The US and the UN nuclear watchdog again warned of the possibility of North Korea carrying out a nuclear test in the near future.

“We remain concerned that the DPRK could seek a seventh nuclear test in the coming days. It’s a concern we’ve warned about for some time,” US State Department spokesperson Ned Price said on Monday during a regular press briefing, underscoring its readiness to respond to any contingency scenarios in tandem with the US allies.

“I can assure you that it is a contingency we have planned for, and it has been a concerted topic of discussion with allies and partners.”

The head of the United Nations nuclear watchdog on Monday echoed the US assessment during the meeting of the 35-nation Board of Governors held in Vienna, Austria.

“At the Nuclear Test Site at Punggye-ri we have observed indications that one of the adits has been reopened, possibly in preparation for a nuclear test,” Rafael Mariano Grossi, director general of the International Atomic Energy Agency, said in his opening remarks.

Commercial satellite images showed that North Korea was restoring access to the yet unused South Portal tunnel of the Punggyeri nuclear testing site.

“The conduct of a nuclear test would contravene UN Security Council resolutions and would be a cause for serious concern,” Grossi added.

The IAEA chief also pointed out that North Korea appears to have operated a main nuclear reactor, which can produce weapons-grade plutonium, at its Yongbyon nuclear complex.

“There are ongoing indications consistent with the operation of the 5MW(e) reactor,” Grossi said.

The IAEA has assessed that the 5 megawatt-electric main nuclear reactor seems to have been operating since July 2021.

Grossi also reported that North Korea has expanded construction activity and completed the building of facilities at the Yongbyon nuclear complex.

The construction of a new building that commenced near the light water reactor (LWR) in April 2021 has been completed. The LWR, which is fueled by low-enriched uranium and estimated to have a capacity of 25-30 MWe, has been under construction since July 2010.

Grossi went on to say that new construction work has also started adjacent to the LWR and the new building.

In addition, the construction of an annex to the reported centrifuge enrichment facility has been externally completed as the roof has been installed, Gross told the IAEA Board of Governors.

The IAEA in March said the centrifuge enrichment facility is located within the Yongbyon Nuclear Fuel Rod Fabrication Plant, but explained that the agency did not figure out the purpose of the facility.

Additionally, ongoing signs of activity have been detected at the Kangson complex, which is believed to be a centrifuge enrichment facility, as well as the Pyongsan Uranium Concentration Plant and its associated Pyongsan Mine.

The Pyongsan Mine and Concentration Plant are believed to be the sole publicly acknowledged places where North Korea extracts uranium ore and turns it into yellowcake that can be used to produce enriched uranium. 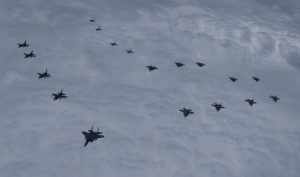 As the possibility of a nuclear test rises, South Korea and the US on Tuesday conducted the combined air force drills and showcased their combat readiness in another tit-for-tat show of force matching North Korea’s continuing ballistic missile launches.

A total of 20 warplanes from the South Korean and US air forces formed a strike package and conducted the formation flight in the airspace over the western sea in South Korea with the goal to simulate an “overwhelming response to threats posed by an enemy.”

“South Korea and the US demonstrate our strong capabilities and determination to promptly and accurately strike against any kind of North Korean provocations by illustrating the South Korea-US combined defense capabilities through the combined air power demonstration,” the JCS said in a Korean-language statement.

“Our military is maintaining a firm readiness posture in preparation for North Korea’s additional provocations while tracking and monitoring relevant moves in close coordination between South Korea and the US.”

The combined formation flight is another display of the alliance’s combat readiness in response to the eight short-range ballistic missiles launched from four different places by North Korea on Sunday.

In counteraction, South Korea and the US on Monday conducted a combined live-fire exercise and fired eight surface-to-surface missiles toward the east coast.